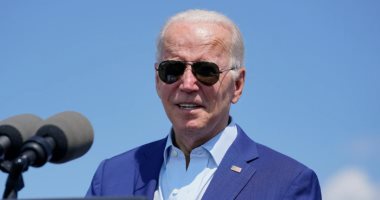 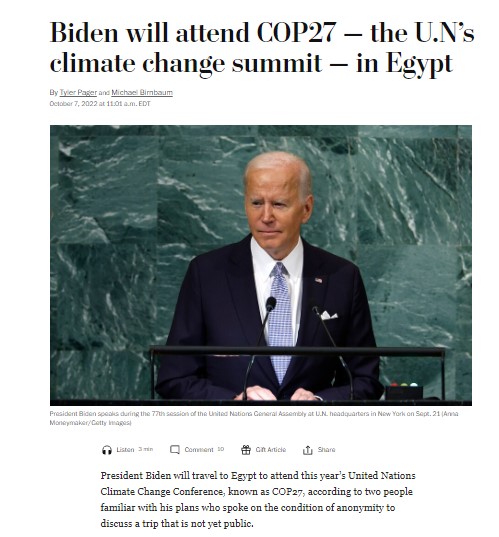 President Biden will travel to Egypt to attend this year’s United Nations Climate Change Conference, known as COP27, according to two people familiar with his plans who spoke on the condition of anonymity to discuss a trip that is not yet public.

10 steps you can take to lower your carbon footprint

Biden’s planned attendance at the climate conference will give a boost to the gathering, which had been at risk of delivering little concrete action amid disputes over ambition and funding.

The developing world has been asking for sharply more assistance from the rich nations that are responsible for the bulk of global warming over history. But those industrialized nations have been reluctant to make any promises.

Now Biden, who also attended last year’s conference in Scotland, will have a chance to showcase the progress his administration has made in the past year – and to cajole other countries to make similar efforts. Climate advocates say the Inflation Reduction Act will help deliver a boost to green industries that can outlast the Biden administration, helping to bypass some of the climate whiplash that comes from sharply different visions toward global warming from Democrats and Republicans.

China, in particular, has exploited U.S. divisions on climate change to present itself as a more reliable global partner and to evade pressure to reduce its own emissions more quickly. Biden’s visit could help pull more nations toward the U.S. camp.

Globally, many climate policymakers have welcomed the legislation, even if some have also said they still wished the United States would commit more toward helping other countries around the world. So Biden will address a largely friendly audience – potentially a respite after the midterms – while being confronted with demands to help the most vulnerable nations.

The trip to Sharm El Sheikh, Egypt, will be the first leg of a multination trip for Biden that is expected to include stops in Cambodia and Indonesia for major global summits, including the G20.

“The President’s travel is not confirmed,” White House spokesman Abdullah Hasan said in a statement.

Some U.S. officials did not expect Biden to travel to the climate conference because it starts just before November’s midterm elections and overlaps with the summits in Southeast Asia. The president also must return to Washington by Nov. 19 to attend his granddaughter’s wedding at the White House.

Sign up for the latest news about climate change, energy and the environment, delivered every Thursday

Officials involved in the talks said that a visit from the U.S. president would boost the talks and were a good sign for the prospects of a deal.

“I’ve been taught as a diplomat to only send your principal in when there is a deal to be clinched or a game-changing announcement to be made,” said one European diplomat, speaking on condition of anonymity to speak frankly about private reactions to the visit. “So if I’m then reversing that logic, deciding to send the principal must mean there is sufficient confidence that such a moment will emerge. This could be a very helpful move.”

Understanding our climate: Global warming is a real phenomenon, and weather disasters are undeniably linked to it. As temperatures rise, heat waves are more often sweeping the globe — and parts of the world are becoming too hot to survive.

What can be done? The Post is tracking a variety of climate solutions, as well as the Biden administration’s actions on environmental issues. It can feel overwhelming facing the impacts of climate change, but there are ways to cope with climate anxiety.

Inventive solutions: Some people have built off-the-grid homes from trash to stand up to a changing climate. As seas rise, others are exploring how to harness marine energy.

Have a question about climate change or climate solutions? Share it with us. You can also sign up for our newsletter on climate change, energy and environment. 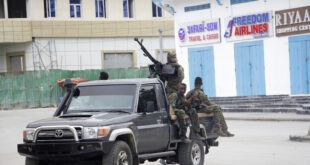 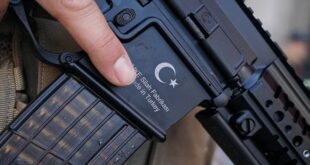 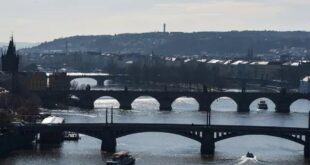 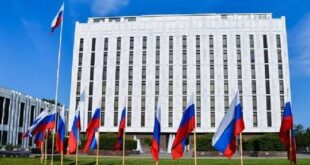